Apiculture is the science of beekeeping. Humans have collected honey from wild bee hives for more than 8,000 years, as shown in Mesolithic rock paintings dating from 6000 B. C. E. By 2500 B. C. E.

Pollination is the transfer of pollen grains, the male sex cells of a flower, from the anther where they are produced to the receptive surface, or stigma, of the female organ of a flower.

Honey is composed of mainly of carbohydrates and lesser amounts of water with a number of minor ingredients.

There are three kinds of bees in a hive: Queen, Worker and Drone. Only the Queen in the hive lays eggs.

Managing the process to ensure consistence in Quality

Through working with registered farmer groups the company has managed to work together with them throughout the honey season from baiting the hives, positioning of hives in the farms, monitoring the progress to check the colonization rates till harvesting time. This ensures the honey and bees wax we deliver to our customers is of high quality and managed under very hygienic. At Bee Natural Uganda the customer comes first hence we put all our efforts into getting them a product they are assured of.

Pollination is the transfer of pollen grains, the male sex cells of a flower, from the anther where they are produced to the receptive surface, or stigma, of the female organ of a flower. Since the honey bee is the most important insect that transfers pollen between flowers and between plants, the word "pollination" is often used to describe the service of providing bees to pollinate crop plants.

Honey bees are good pollinators for many reasons. Their hairy bodies trap pollen and carry it between flowers. The bees require large quantities of nectar and pollen to rear their young, and they visit flowers regularly in large numbers to obtain these foods. In doing so, they concentrate on one species of plant at a time and serve as good pollinators for this reason. Their body size enables them to pollinate flowers of many different shapes and sizes. The pollination potential of the bees is increased because they can be managed to develop high populations. The number of colonies can also be increased as needed and the colonies can be moved to the most desirable location for pollination purposes.

Business in a bee hive

From Bee hive we not only get honey but also, Bees wax, Propolis, Pollination, and Bee venom 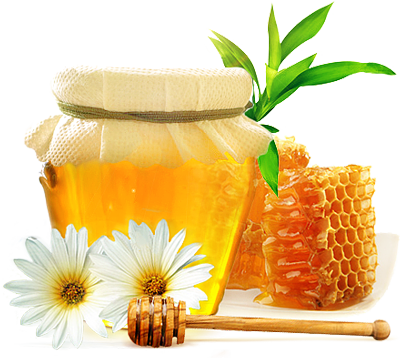 Honey Ingredients: What is Honey Made Of?

Have you ever asked, “What’s in honey?” Well you’re in luck because I’m about to tell you probably more than some of you wanted to know! The short answer for those of you with short attention spans is this: Honey Composition:

Honey is composed of mainly of carbohydrates and lesser amounts of water with a number of minor ingredients. The graph below gives a good breakdown of honey ingredients by showing types and amounts . Also below, For those of you with curious minds I’ve included a little more detail:

Aroma Compounds: Ever wonder what makes honey smell and where that smell comes from? Well a substance called honey volatiles are the source! Often these volatiles come from the plant the honey is sources from but occasionally the bees add them.

Bacteria and Yeast: You may already be aware that because of the high sugar content in honey it is virtually impossible to for microorganisms to grow in a honey solution. In fact honey contains less microorganisms than any other natural food on the market today!

There are bacteria present in honey. The most famous of which is botulinum. These bacteria pose a potential threat to children under the age of 1. Recent studies have shown that this risk is extremely isolated as the amount of the bacteria in honey is very low and that the warning is unnecessary as there are many other natural foods which also contain botulinum.

Honey comes by its yeast content naturally. Yeast can cause undesirable fermentation. In order to avoid this, honey should be harvested at a low humidity and should be stored in air-tight vessels. 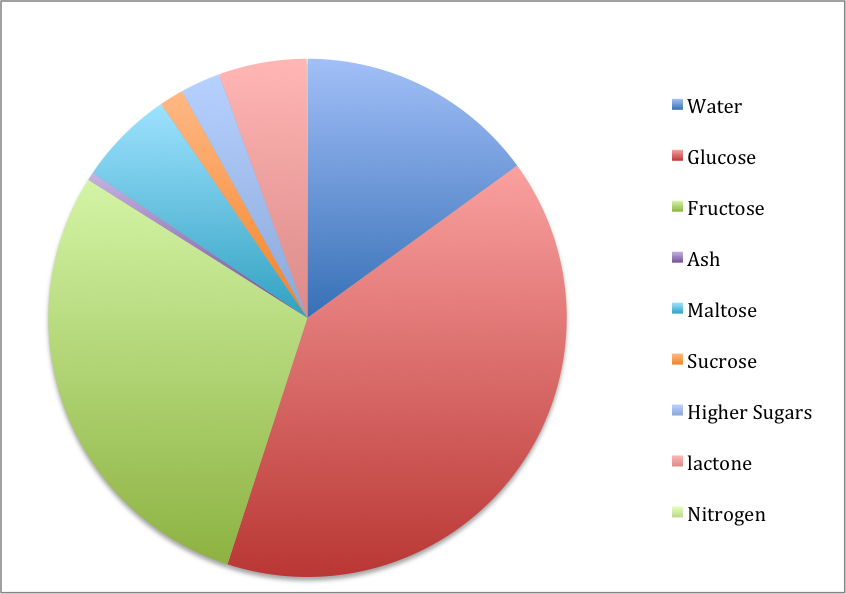 Nectar itself is composed mainly of sucrose and water. Bees add enzymes that create additional chemical compounds, inverting the sucrose into fructose and glucose, and then evaporate the water so that the resulting product will resist spoiling. Hence, honey is a source of carbohydrates, containing

* 80% natural sugar -- mostly fructose and glucose. Due to the high level of fructose, honey is sweeter than table sugar.
* 18% water. The less water content the honey has, the better the quality of honey.
* 2% minerals, vitamins, pollen and protein

The vitamins present in honey are B6, thiamin, niacin, riboflavin, pantothenic acid and certain amino acids. The minerals found in honey include calcium, copper, iron, magnesium, manganese, phosphorus, potassium, sodium and zinc. I learnt that "conductivity" is an indirect way of measuring the mineral content of a honey. Also, one of the most encouraging honey nutrition facts - this natural sweetener has antioxidants and is free of fat and cholesterol!

* One tablespoon of natural sweetener honey contains 64 calories.
* Honey has a healthy Glycemic Index (GI), meaning that its sugars can be gradually absorbed into the bloodstream to result in better digestion.
* Honey contains natural minerals and vitamins which help the metabolizing of undesirable cholesterol and fatty acid on the organs and tissues into the system, hence preventing obesity and promoting better health for us.

Honey is a "no-no" for diabetics if you ask the doctor. But were you told that honey is a healthier choice in the diabetic diet than table sugar and any other non-nutritive sweeteners? 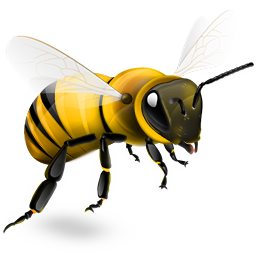 • There are three kinds of bees in a hive: Queen, Worker and Drone.

• Only the Queen in the hive lays eggs. She communicates with her hive with her own special scent called pheromones. The queen will lay around 1,500 eggs per day.

• The worker bees are all female and they do all the work for the hive. Workers perform the following tasks inside the hive as a House Bee: Cleaning, feeding the baby bees, feeding and taking care of the queen, packing pollen and nectar into cells, capping cells, building and repairing honeycombs, fanning to cool the hive and guarding the hive.

• Workers perform the following tasks outside the hive as Field Bees: Gathering nectar and pollen from flowers, collecting water and a sticky substance called propolis.

• Bees have two stomachs - one stomach for eating and the other special stomach is for storing nectar collected from flowers or water so that they can carry it back to their hive.

• The male bees in the hive are called drones. Their job in the hive is to find a queen to mate with. Male bees fly out and meet in special drone congregation areas where they hope to meet a queen. Male drone bees don't have a stinger.

• If a worker bee uses her stinger, she will die.

• Bees are classified as insects and they have six legs.

• The bees use their honeycomb cells to raise their babies in, and to store nectar, honey, pollen and water.

• Nectar is a sweet watery substance that the bees gather. After they process the nectar in their stomach they regurgitate it into the honeycomb cells. Then they fan with their wings to remove excess moisture. The final result is honey.

• Bees are the only insect in the world that make food that humans can eat.

• Honey has natural preservatives and bacteria can't grow in it.

• Honey was found in the tombs in Egypt and it was still edible! Bees have been here around 30 million years.

• Bees have straw-like tongues called a proboscis so they can suck up liquids and also mandibles so they can chew.

• Bees carry pollen on their hind legs called a pollen basket. Pollen is a source of protein for the hive and is needed to feed to the baby bees to help them grow.

• The average worker bee makes about 1/12th of a teaspoon of honey in her lifetime.

• Bees have 2 pairs of wings. The wings have tiny teeth so they can lock together when the bee is flying.

• Every 3rd mouthful of food is produced by bees pollinating crops. Flowering plants rely on bees for pollination so that they can produce fruit and seeds. Without bees pollinating these plants, there would not be very many fruits or vegetables to eat.

• A single beehive can make more than 100 pounds (45 kg) of extra honey. The beekeeper only harvests the extra honey made by the bees.

• The average life of a honey bee during the working season is about three to six weeks. There are five products that come from the hive: Honey, beeswax, pollen, propolis, and royal jelly.

• Beeswax is produced by the bees. Bees have special glands on their stomach that secrete the wax into little wax pockets on their stomach. The bee takes the wax and chews it with her mandibles and shapes it to make honeycomb.

• Propolis is a sticky substance that bees collect from the buds of trees. Bees use propolis to weatherproof their hive against drafts or in spots where rain might leak in.

• People have discovered the anti-bacterial properties of propolis for use in the medical field.

• Royal Jelly is a milky substance produced in a special gland in the worker bee's head. For her whole life the Queen is fed Royal Jelly by the workers.

• Although bears do like honey, they prefer to eat the bee larvae.

• Honey comes in different colours and flavours. The flower where the nectar was gathered from determines the flavour and colour of the honey.

Apiculture is the science of beekeeping. Humans have collected honey from wild bee hives for more than 8,000 years, as shown in Mesolithic rock paintings dating from 6000 B. C. E. By 2500 B. C. E. , Egyptians were keeping bees in artificial hives. Hives exploit the honeybees' natural tendency to build nests in cavities, and allow apiculturalists to easily move (via boat, wagon, truck) and manipulate bee colonies. This mobility has allowed beekeepers to introduce honeybees around the world: The first hives were brought to the New World in the 1620s by European settlers.

Traditional hives are made of hollow logs, holes built in mud walls, or cones of mud, earthenware, or thatch. A modern apiary hive is a series of stacked boxes. The bottom box serves as the brood chamber where larvae develop; the upper boxes provide a space to store honey. Each box contains eight to twelve frames, which are set so they approximate the distance between combs in a natural hive. Bees then build their comb on the frames, which can be removed individually. Beekeepers remove the wax caps that cover each cell of the comb and let the cells' contents drip out by gravity, or use a specialized machine to spin the frames and draw the comb contents out by centrifugal force. The honey is then filtered and stored. Honey quality is determined by its flavor, clarity, and color.

Honey contains natural minerals and vitamins which help the metabolizing of undesirable cholesterol and fatty acid on the organs and tissues into the system, hence preventing obesity and promoting better health for us.